I’ve just returned from NWAV 2017, a conference centered around language variation and change. Although I’m technically focused on social computing, my research looks at situations of language change in online communities, like what makes certain lexical innovations survive longer than others. In the work I presented at NWAV (poster here), I found that lexical innovations on Reddit are more likely to succeed when they have higher dissemination among social and linguistic contexts. Here is photographic evidence of my presentation, documented by Emily Sabo! 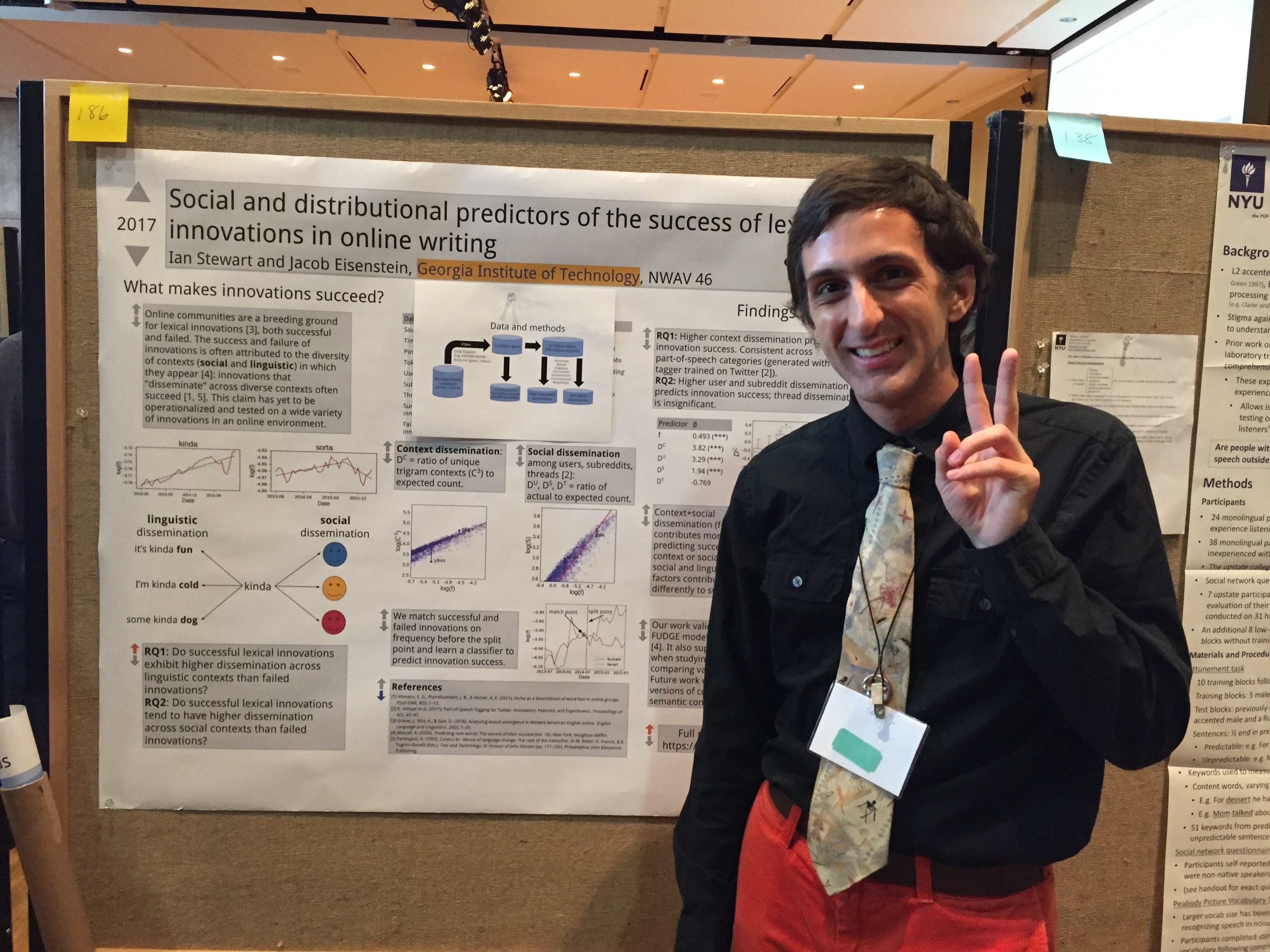 I received a lot of good feedback on the project and I also got a chance to give feedback on some other interesting works in quantitative sociolinguistics. Unfortunately most of the presentations are not available online yet, so I can only provide a brief summary. Here were a few related to internet language usage that I found interesting.

These works were most relevant to my interests in sociolinguistic variation on the internet, and there’s lots more to be said about each of them. For those reading, let me know if you find the slides/posters for these projects!

I also spent a lot of time listening to talks that were irrelevant to my main interests but still really interesting for a more broad sociolinguistics perspective. One of the biggest emerging themes I saw was a return to perceptual studies as opposed to the typical change-over-time approach. Here were some of the most interesting perceptual studies that I was able to attend:

So many more papers I could talk about, but I’ll cut myself off. Perception of language variation is a rich and open research space that I’m going to keep my eye on.

Recently I’ve trying to write about more “fuzzy” topics like what it means to be part of a community, so here’s my first attempt.

One thing that I’ve missed as part of a computer science program is the feeling of a distinct academic community. Because the field of natural language processing is so big, it can be hard to figure out the boundaries and structure of the field. Returning to a smaller field like variationist sociolinguistics reminded me of how fun the community can be. One community norm that I especially enjoyed was the wordplay: since linguists are often word nerds, puns abounded and even led to some amusing spoonerisms.

More seriously, I enjoyed the commitment to engagement outside the field that more linguists are trying to invest in. The screening of Walt Wolfram’s movie on African American English in America (“Talking Black in America”) led to great discussion on how to get non-linguists interested in serious issues like racial discrimination. John Rickford also led a terrific discussion on how linguists need to be more committed to social justice more broadly, since our studies cannot do much good alone if they are not accompanied by substantive action to, e.g., address educational inequality. Although I don’t know exactly what I can do to help with this engagement, I would like to spread knowledge to a more public audience and encourage people to celebrate, not denigrate, dialect usage.

I would like to see a similar level of engagement in natural language processing and data science in general. The frequent focus on task-driven application, such as detecting hate speech, is commendable and tied to real-world consequences. However, so many of those applications seem to belie a genuine commitment to larger social issues: for instance, can the NLP community contribute to larger and more political efforts to make the internet a “better” place? Can we have a meaningful conversation about the limits of our “tasks” and how to broaden the scope to include a bigger slice of human behavior, like language variation? I think that we can, and we should.